As a writer, you generally focus on one particular genre; be it music, politics, art or current affairs.

As a long time sufferer of several chronic illness, Headbangerwoman Karen Graham has also contributed to a few articles to health related websites, and now she has published a book about living with chronic illness, under the pen name Erica Worth.

You can find it here

The most recent show came with pit access;  Not that being at eye level with Fat Mikes pasty knees is really an admirable spot, but at least it provided a barrier between Headbangerwoman and 600 sweaty, rowdy fans who were already shoving, clamouring, and hurling, um…”stuff.”  Not to mention the odd prick hurling themselves.

Even before the band appeared on stage there was an urgency for some to start pushing and shoving the crowd towards the barrier.  Security, while trying their hardest to diffuse any situations that were brewing were advised by the bands management to leave it alone. They did just that and the intensity appeared to level out…there are no reports of major injuries.

Aside from one compete prick jumping on stage and kicking Fat Mike in the ankle that he’d recently injured at a Vancouver show, there was relatively little in the way of knob headedness.  Maybe he was hoping he’d get kicked in the head and have a story to tell….

NOFX fans are in the crowd to drink in the atmosphere.  This show had atmosphere in gallon buckets.  There was (as always) banter, and there was drinking, but most importantly there was music. 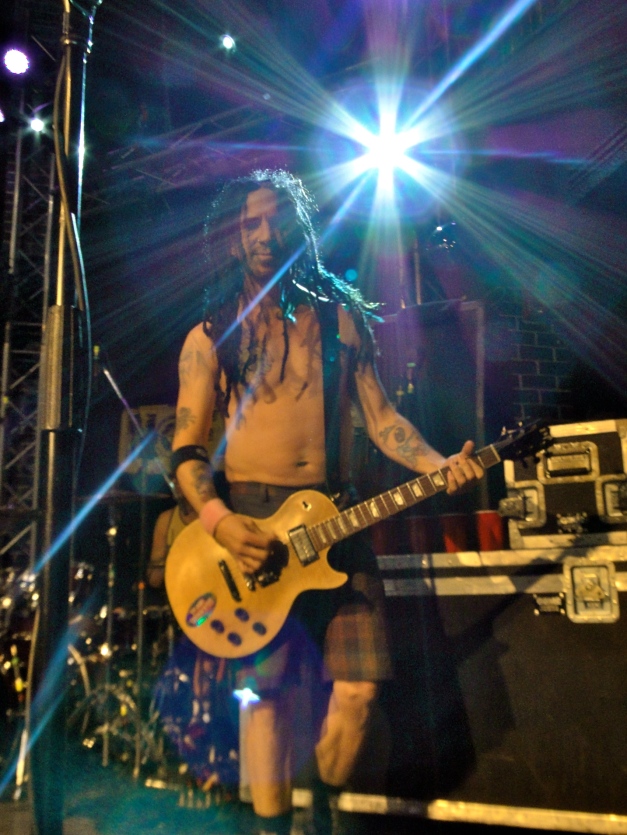 MOST in the crowd sang along to every last motherfucking song at this show.  They were probably four years old when Headbangerwoman attended her first NOFX show.  Bridging the age gap is apparently something that these four middle aged, less than conforming blokes do well.  They certainly managed to attract every misfit and freak in the Greater Edmonton for this show.  A formidable achievement.  Bo Derek had long since done a runner, and most of those in attendance would be in fact leaving to go home with Bo Diddley….

While many would be reviled at a middle aged portly bloke with a mohawk, wearing a black dress, and preaching his particular brand of art on a stage, in this moment it was exactly perfect.  Michael Buble, while he is surely pleasant and all that, just doesn’t have what it takes, like Fat Mike does.

NOFX have managed near cult status, while keeping it so ground roots that it almost beggers belief, and it seems entirely possibly that they could pull off a full week of SOLD OUT shows in this very conservative town, no issue.

Tonight will be the same, but different…

Huge thanks to Chad