After 27 years the line up of Pigface continues to excite, intrigue, frighten, and energize me with the prospects of new collaborations and new lifelong friendships. Some details I don’t fully know yet, some things are changing, but the prospect of being on stage with Charles, Lesley, and Mary again, is truly wonderful, especially with the recent accolades of our work on FOOK by Pitchfork.
Music is a powerful force and again thrusts me into new relationships with Randy Blythe of Lamb of God and Justin Pearson of The Locust. Curse’s solo career is exploding right now and it’s so good to have him celebrate onstage with us. I’ve spent so much time with Greta and grown to love her approach to the bass, and the involvement of our dear friend Gaelynn Lea is exciting to the core. It’s one thing to push the boundaries of music, but it’s quite another to wave the flag for accessibility and this makes me proud and hopeful for the future. I know there will be bagpipes, sitars, and tears of joy and pain and many old friends joining us along the way. I quote this speech from Shakespeare’s Henry V, on the inside of every band members itinerary, but let me share it with you:

“And gentlemen in England now a-bed
Shall think themselves accurs’d they were not here,
And hold their manhoods cheap whiles any speaks
That fought with us upon Saint Crispin’s day.”

Shooter up the Duff

Vixen and former JSGR vocalist and musician Janet Gardner has made this emotional statement on her Facebook account today.

“After much soul searching and many sleepless nights, I have decided that it’s time for me to step aside and let Roxy and Share pursue their vision for the future of Vixen. Vixen will always have a very special place in my heart and I am incredibly grateful to have been a part of it. I would like to thank everyone for the amazing support over the years, and as Roxy and Share continue to keep the heart and soul of Vixen alive and well and I continue on my path, your continued support to all would be greatly appreciated. Love, Janet 💗”

Janet and her powerhouse vocals and enigmatic personality will be truly missed. 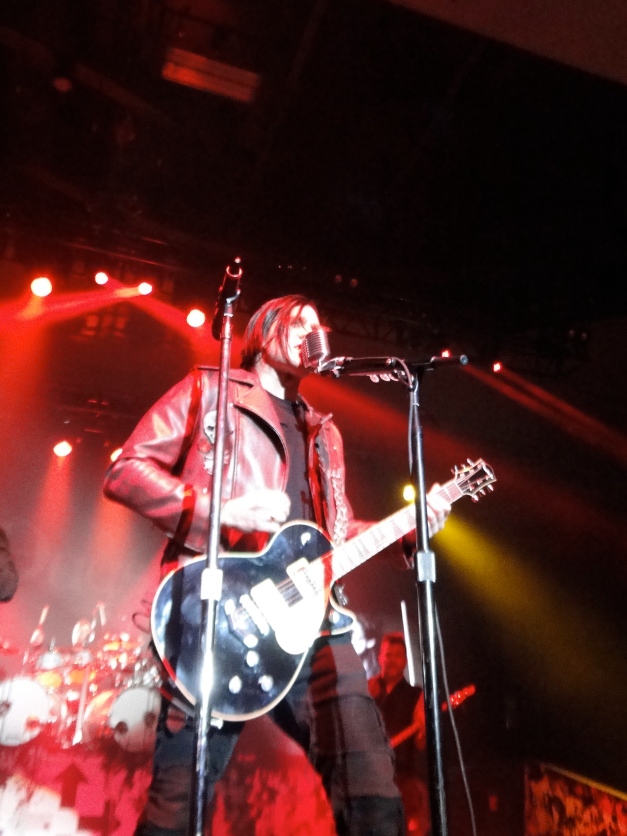 At the height of their success these guys grabbed the reins of Motley Crue, Van Halen, and Three Days Grace, bringing us new memories, new meaning, and new music.

In the case of the latter, Walst is still up on stage alongside brother Brad, bringing it hard at every live performance.

A little light banter mixed with an excellent acoustic interlude.

The last time Headbangerwoman saw Three Days Grace the crowd were bouncing off the walls at Rexall Place, Edmonton.

This show on December 12th 2018 at Shaw Conference Centre in Edmonton was a touch smaller as were some in that crowd, (a good amount of kids present) and a little less rambunctious, but the crowd were rocking the bleachers and in full support of the headliners none the less. 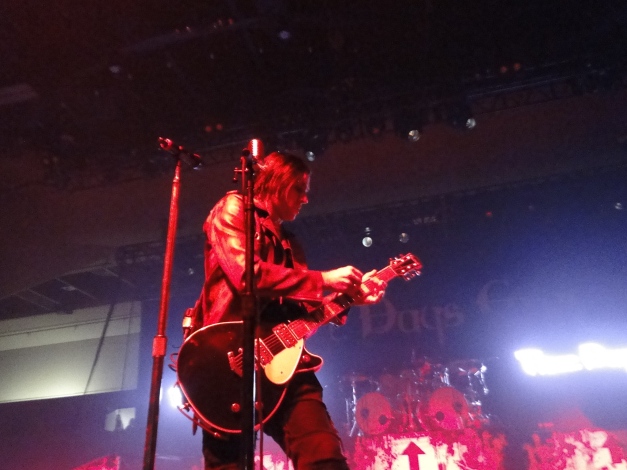 A young lady on the floor was spotted signing songs to her Dad. 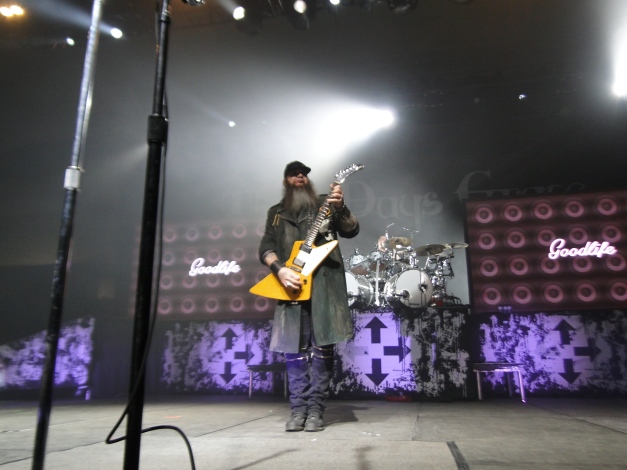 A member of the police presence during the last 20 minutes heard to say “this was the only good song they had”…The fans quite clearly in disagreement!

Also in support of this Canadian staple of rock was Texan band Nothing More. These guys are not the boys next door, rather; Rage Against the Machine meets Jim Morrison, takes a good hit of crack and streaks repeatedly in from if the elderly neighbors house! 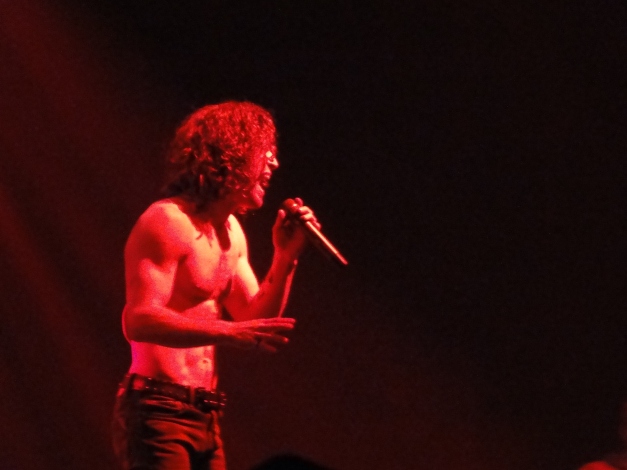 Producing an excellent mix of headbanging noise and attitude, and sounding great as live performers whilst doing so, this band was a pleasant surprise!

Arriving a tad late Headbangerwoman caught Bad Wolves mid-way through their third last song. A heady sound with a darker vibe, the crowd went crazy when they announced that their final song Zombie had just gone double platinum, and that all proceeds would be given to the children of late Cranberries vocalist Delores O’Riordan; who was found dead in a bathtub on January 15th 2018 due to accidental drowning on the eve of recording the song with this band.

Thanks were shouted out to General Manager Rose Slanic, who was in attendance.

It’s So Easy: and Other Lies….

You gotta love Mr Mike Motherfuckin’ McCready, and while we should laud him for a moment here…this ain’t about him.

Another of Seattle’s greatest; Duff Motherfuckin’ McKagan, is the focus here.

After the release of a book by the same title, originally in 2011, the cinematic version, of It’s So Easy: and Other Lies (2016), now on Netflix, provides some much needed depth, and great visual additions.

Taking to the stage and baring his soul to a live audience, Duff reads from the book as his family and friends, including Slash, Nikki Sixx, and Susan Holmes-McKagan, fill in in the gaps via interviews.

McKagan is open and honest, and shines a much needed light on the very real struggles of addicts. When talking of his recovery, he becomes animated.

He also shines when he talks of his thirty plus years as a musician with bands such as The Walking Papers, Velvet Revolver, and the the more recently reunited Guns N Roses.

The band and accompanying string quartet provide a moving soundtrack to the theater performance, and serve to add theatrical emotion.

If you are a fan of music, a survivor of addiction, or you just need a decent watch, this should be near the top of your “to watch” list.

Anyone that wasn’t in their seats for Warpaint at Rogers Place, Edmonton, on Friday October 27th 2017, missed a fucking incredible experience. The four piece from Los Angeles belted out a stunning, but not nearly long enough set. All members were given equal frontage on the stage, and that there was still plenty of room for them to mingle and vibe as each song offered a different lead vocal, and unique take on the funk that is the foundation that Warpaint are know for. Unfortunately the stage was kept quite dark throughout the set, and from the back half of the venue shadowy figures of the band were really all that anyone could see.

In case you were wondering…and you should be! From stage left; Stella, Theresa, Emily and Jenny Lee are Warpaint.

As well as playing newer tracks including New Song, older favorites Elephants, Disco//Very, and Intro; leading to Keep It Healthy, were not forgotten.

A set far too quickly over, and a fabulous choice to lead the way for the headliner.

Breakdown was pretty rapid, and Depeche Mode were on the stage by 20.45, a silhouette of an obviously revered Dave Gahan writhing and contorting to Going Backwards, on a riser behind the rest of the band. True to form this was a show to promote their current release, and SPIRIT is yet another excellent record by his trio, but some older members of the audience did seem disgruntled by the fact that the 80’s and 90’s hits that shot the band to fame, were not being covered during the early part of the show, and they ignorantly sat down playing with their cell phones! Of course true fans have supported the band throughout, and have kept up to date with all of the music that has been released during their four decade career….and rightly so, because it’s all absolutely fucking mind blowing.

Gahan has a history of being a troubled soul, but FUCK. Just FUCK. If Rudolph Nureyev and Jane Fonda produced a child, and named him Freddie Mercury, but he had an alter ego driven by nitromethane, here is the result. Demanding adulation throughout the two hour and fifteen minute show, and absolutely deserving of it, this guy is a mother fucking artist, he’s a singer, he’s a dancer, he’s a performer, he’s the man that words are not sufficient to describe him.

Of course there are other members of the band, and mainstay Martin Gore showed his metal by fronting the vocals on three songs during the show, while Gahan was taking a break. Gore has a more than excellent voice, and his musical contribution is absolutely key to the Depeche Mode sound, but he isn’t the presence that is Gahan, and as it became glaringly apparent through the show, there is no other frontman, or woman, alive on earth at this point in time that is even coming close to what he is.

Let’s not forget that this tour is running for ten months, with four more months to push…these guys will produce this show one hundred and six times, and yet they are giving 250% of their all each time, and then squeezing the audience for just a little more. Being onstage, performing, putting on a show, is an obvious spiritual occurrence for Gahan. He is in the zone, but this is not a selfish act. This is about everyone in the room, about giving and receiving…and it is so much more of a religious experience than anyone could ever get in the village church..Unless Gahan happens to step in for your local vicar and become your Personal Jesus!

The set list was put together with a lot of thought, with a few slower numbers peppered through, and an unexpected cover of David Bowies Heroes added to slow the encore and make you take stock, but also with enough older “popular” songs in the final eight to get the more mature folk in the audience off of their phones and onto their feet.

If you weren’t blown away by this show in it’s entirety, and you are not as sad as fuck that it’s over today, then you need to check in and get on board, because you got way more than you paid for . This shit is the real deal.