On the very weekend that Hurricane Harvey was battering the coast of Texas, Janet Gardner and her band were similarly assaulting the ears of music fans the world over.

Somehow, in between live appearances with her other band Vixen, Gardner and her writing partner, guitarist Justin James: who just so also happens to be Gardner’s husband, have put together some really fucking kick ass noise for the self titled Janet Gardner CD.

Right from the phase out of the kooky carnie music intro, Rat Hole punches a proverbial second hole right through the fucking ozone layer. 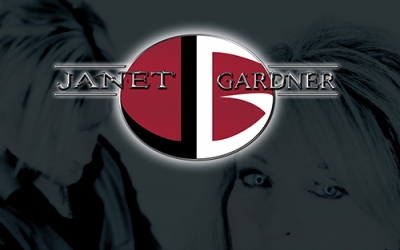 By the end of the song you’ll be left feeling like CPR was performed on you really badly, and for a very long time, even though you didn’t need it, and just because the EMT felt like he could get away with doing it….Then you’ll beg him to do it again, because the rush is so fucking amazing.

If getting a degree in dental hygiene: Gardner did this in 2005…is capable of re-energizing a musician to this calibre, we have a few names that we think we should forward to dental school.

Rarely in the past two years has Headbangerwoman listened to a new song from start to end, and over and over….but this fucker grabbed her by the hair and pressed her face hard up against the speakers, allowing her release only when she thought she might pass out.  Gardner’s voice is seductive and moody, more so than on any Vixen track. An accidental evolution? Or perhaps the result of some serious shenanigans with James? The chemistry between the two on the Rat Hole video is impossible to avoid.

Hippycrite is the second listed song and has a Slave to the Grind sound; with a slow, heavy bass riff and oily guitar, of course devoid of nose rings, chains and cigarettes. Head banging is a must, grinding your partner is a requirement.

Let It Be Over is an environmental and humanitarian cry for help. Well written, well placed. Could and should be used by the Obama Foundation or a similar outfit, to help bring forward awareness to the mess we are in as a species.

Candle is a beautiful ballad. Heartfelt lyrics…telling and revealing of a story about lack of confidence, and the desire to be there for someone.

Acoustic number Best Friend is another beautiful piece, again, telling and quite obviously documenting the story of the Garner/James romance.

There are ten tracks total on this cd. Every single one is no less than amazing.  An absolute stunning result for a new outfit.

A record released because of love…and great dental hygiene.