Twenty plus years in between shows is probably considered a long time.

A selection of guitarists appear to have started mummification.

Drummers disappear totally.  Yes, really, Nicko McBrain appeared (or not) to be invisible for most of the Iron Maiden show at Rexall Place, Edmonton, Alberta, Canada on July 27 2012.

Alas the show support has few viewers as there is a serious lack of speed in getting people through the doors in a timely manner.  Coheed and Cambria could be forgiven for thinking no-one has shown up.  Entry to the venue was slow, but on a good point, security excelled.

The crowd know the headliners are on the way, prompted by the pre-show track Doctor Doctor, by UFO and give it their all to welcome the band with screams and shouts, loud enough to wake the baby next door and the one in the next block!

Loud, bright, hot pyro accompanies the entry of the mighty Maiden, followed by a blur of Bruce Dickinson.  No longer sporting his bad bangs of the late 1980’s, Dickinson is the only band member to have had a haircut.  Marauding upon the stage, the vision of a mission driven warrior who had a rather large and painful metal object rammed up his arse.  Maybe he misplaced his foil!  The returning lead voice is not still for a second.  In 30 plus years the man with the voice has not slowed and he does not falter.  Perfection in his delivery, both theatrically and vocally is at full throttle.

Bassist and songwriter Steve Harris is alongside and upfront, beating his bass like it owes him money.  Harris aside from the odd laughter line appears as he did back in the day.  A master of his craft, with the look of determination and I told you so.  You can hear him screaming telepathically at the crowd…

Guitarists Dave Murray, Adrian Smith and Jannik Gers  give the crowd exactly what they want, loud, melodic guitar excellence, providing among others, classic songs Run To The Hills, The Number Of The Beast and Running Free with ease and expertise. These boys are so professional in their delivery they mesmerise and although music mogul Sharon Osbourne may have long ago formed a negative opinion of these NWOBHM legends, whatever she thinks or thought, she cannot take away from the fact that after so long these British blokes are still filling stadiums worldwide and producing a show that is worth waiting in a three hour plus, long line for.   Skinny jeans, Hi- Tops and sleeveless T’s intact.  No lip syncing, no prompter, flash bangs, Egyptian animals with glowing eyes and a 10 feet tall wanking Eddie providing the crowd with mid show entertainment. 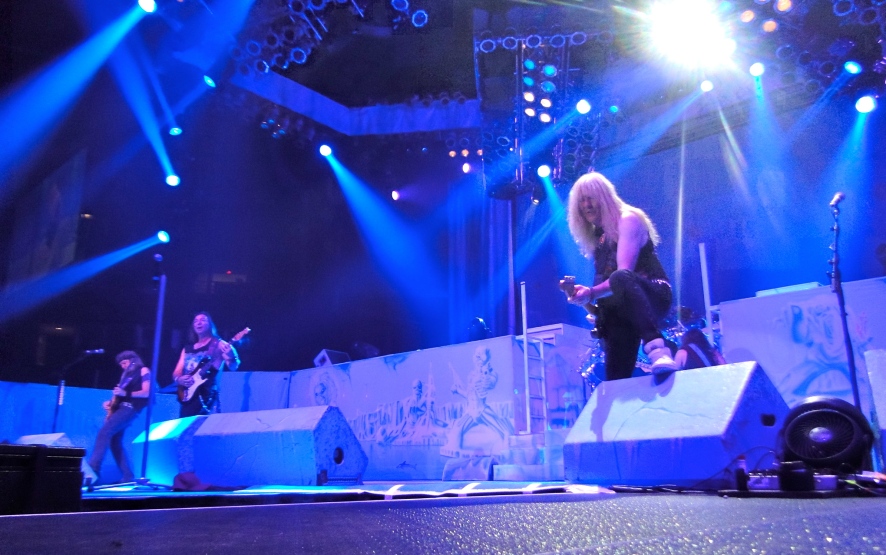 What more could you the modern day metal head possibly want?

This article is dedicated to my good friend Mark Browne who lost his hard fought battle with cancer today.  Mark was a musician and a music lover to the end.

For Teresa, Mercedes, Imogen and Jak, inspirational and much loved.