Swedish singer Mia Klose is very obviously vocally talented, but that she is talented in a multi faceted manner, is maybe not so obvious.

Klose grew up in Sweden, birthplace of among others, ABBA.  Motley Crue bassist and founder Nikki Sixx, recently announced his love of ABBA.  TiTT asked Klose, does she feel the same?   “I’m a total ABBA fan!  Bjorn and Benny have possibly written some of the best songs of all time.”  Klose disclosed.  “The skills of their song writing is beyond words.  I think as musicians it’s important to be able to appreciate all kinds of music, not just the genre you have specialized in.  If you take your inspiration from a single source, your own music will quickly become boring and everything can start to sound the same.” 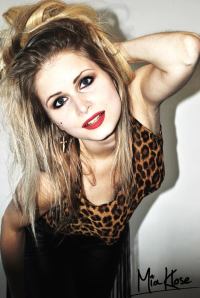 With a voice that could take you back to 1986 or indeed 1976, Klose vocal is also very fresh.  She touched on that.  “I think I am lucky, that my voice just sounds like that naturally.  The material I write has a touch of the 1980’s and early 1990’s, but as my band and I are all young that will reflect through the music too.”

Not only does she have a voice fit for the 80’s and 90’s, but Klose has a look that is that of the love child of 80’s vocal vixens Lita Ford and Doro Pesch.  TiTT asked whether these two iconic women were an inspiration to her?  “ I take my inspiration from so many different sources!”  She tells enthusiastically,  “ There are times I will get inspired by walking in the forest, but I spend most of my time in London, England.  It’s so easy to find inspiration here, it’s a real freak show sometimes.  Full of crazy and interesting people!  I definately find Janis Joplin and Gwen Stefani inspiring, if I was to pick out other female artists!”

It would appear that Klose, surrounded by crazy people, may have dumpster diving tendencies too.  “I make most of my stage clothes myself and always have done,”  Klose shared.  “I love turning old garments into new.”  Of course the aforementioned Stefani has always made her own clothes, so maybe what we see here is a future fashionista?   Klose elaborated;  “You can find clothes on the streets of London that people have lost, or thrown away.  There are so many people coming through London that my supply is great.  They leave clothes behind, I customise them!  I love vintage clothes too and London is also great for that!  I always dressed a little differently from the mainstream in school.  I was always focused on creative projects, even then.  It would be hard for me to judge whether other people thought I was the freaky kid though.  All I know is I felt a bit like an outsider until I started music college in Stockholm, where I met like minded people.”

Did we mention that as well as being a master seamstress, Klose can also sing, play drums, guitar and violin!  But back to the voice.  We intruded into the bathroom and Klose told us that she sometimes sings in the shower.  “I do sometimes sing in the shower and I sing whatever comes to mind really.  It has a great acoustic and can be a good place to warm up before a show.”  So if you happen to be lucky enough to be backstage at a Klose show and you hear singing from the shower, it’s not a mermaid!

Klose recently played a show or two with Falling Red drummer, Dave Sanders.  Dave is a friend of TiTT so we wanted to get the lowdown on him….  Klose told it like this;  “Dave is an absolute star.  He learns so quickly and is so easy to get along with.  We do have a full new line-up for my band now though.  In addition to C-Rexx (bass) and Jonny Nonsense (guitar), who have been with me for a while, we now have Swedish Kalle, who completes the iconic twin guitar sound and Henry Rogers on drums.  Rogers was recently voted top ten of the worlds best drummers in PROG Magazine!  I’m thrilled to have such skilled musicians working with me.”

Not only is she great at performing live, but she isn’t fazed by being on stage.  “It feels pretty natural for me, to be on stage.  It’s something I have done since an early age.  I do get very focused before a gig though.  I get loaded with energy and excitement!”

Driven is where she really needs to be at.  The heyday of Sleaze/Rock/Hairmetal are often seen as dead in this day and age.  Any artist performing this genre needs to be ridiculously dedicated.  We asked Klose what drives her?  “I just love this kind of music.” Was the short answer.  We pushed…  “If you are just looking at trends and following what is popular, you will only survive for as long as the trend does!  But, if you are honest and you make music that really comes from the heart, you are on to something that is real.  This is no business for people who want an easy ride.  You have to work very, very hard and be extremely driven and be willing to work hard while you live a very frugal life.”

Hard work and just existing is paying off in this case.  Klose just recorded her debut cd, LONDON.  We wondered, what her highs and lows were while recording?  “To be honest, the best part was when it was all done!”  Klose laughs,  “I really don’t like being in the studio.  It’s great to get the end result, but I’m a perfectionist and singing the same verse over and over, just to get a perfect result, it’s very frustrating.  In the end you can feel like you never want to hear those songs again.  It is totally worth it in the end though!”

In the end the thing that Klose is most proud of on the record is that it happened at all!  She offers;  “It is a huge struggle to release an album and get to the place I am right now, completely on your own, without a label behind you!  I have learned to do everything by myself and that is something I am really proud of!”

Klose came so far alone, does she think a return to Sweden will ever happen?  Drummer Mikkey Dee  of Motorhead lives there when he is not touring, ABBA vocalist  Agnetha Falkstog too.  Even the fabulously flambouyant Micheal Monroe returned to his native Finland after great success in the US and UK!  Klose answer is… “Possibly in the future.  But right now I would not want to move back.  I felt limited in Sweden, in London creativity can just flow.  No one questions me.  It’s so liberating.  Maybe in the future, when I want to start a family I would consider going back to Sweden, where it is nice and quiet, a great place to grow up!”

Before that happens, what plans for 2014 for Klose and Co.?

“We plan to record a single, called Living For Love complete with a video.  A Spring release is scheduled.  Then we will announce some gigs as soon as permitted.  I think 2014 is going to be a great year for us with the new line up!”  Klose is confident!

All pictures courtesy of Mia Klose