Till Lindemann; King Of The Zipline!

A little while before the last band were due to hit the main stage on Sunday 16 June 2013, some poor bastard got stuck on the zipline.  It took fifteen minutes or so for the staff to zip down and save him.  Of course by this time tired, happy, drunk, sunburned, stinky, hung over, bored and just plain in it for shiggles people, had started to use the guy for target practice with their empties.  Little wonder his wellies didn’t fall off the way he swung, ducked and dodged.  They didn’t and he was saved.  What ensued was an all out bottle fight under the zipline.  Kids, moms, adults dressed as animals, naked blokes, Jesus and the like, on the command of “bottle fight” launched into it and were engrossed in this childish, yet oh so very amusing and giggle worthy time waster, for a good half an hour.  Of course, if the zipliners had been allowed to continue it would never have happened.  They were stopped after Welly Dude got taken back to his tower and attentions of the masses turned to those about to jump!  Amid shouts of “Pussy”, “Jump you bastard” and other worthy insults, the Zipline Gods decided to hold on to their targets.  Sensible, if not a little po faced. 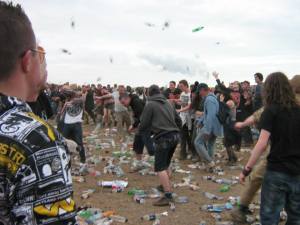 Bored, wet and hungover. The masses take to throwing shit!

Where are you?  You my friend are at Download Festival , Castle Donington, England.  It was a sunny day, well a little cloud here and there, but sunburn aplenty, which is surprising as the two previous days were less than pleasing.  The words Rock Festival and Muddy Field joined again in an unholy matrimony.  Of course the several stark bollock naked dudes, adult furry animals and poncho’d jello types, seemed not to be all that perturbed.

Music each day of the festival (Friday, Saturday and Sunday) kicked off at 10am ish in the Pepsi Max Stage and was an alarm call for those campers in VIP and Disabled camping, who were close enough to hear.  A short five-minute walk took you to the right side of the stage as you looked at it, past the shops and stalls and eventually toward the food.  Food was top notch.  Pulled Pork, Giant Yorkshire Pudding, Noodle, Pizza and Fish and Chips were reasonably priced and tasted good.  Tea, coffee and pop were not selling for an arm and a leg and were not watered down to within an inch of their life.

Toilets.  Yes, we are going there.  When there are people on patrol, cleaning and the like, why then is it possible that dickhead a); that’s what we will call him, is able to do a shit, put it in a cup and upturn it on the flush, ready for the next unsuspecting toilet attendee to see as soon as he/she/heshe enters the little room.  It happened.  There is no scarring.  It just needed to be mentioned, that’s all.

It would be impossible, well OK, it would take far too long to review each and every band that played this year.  A few do really deserve to be written about however.  Starting with a band that should have been a much bigger thing in the late 80’s and still belt out superb music.  Little Caesar were robbed of what was essentially theirs for the taking back in the day.  It seems that it has only made them a better, more giving band.  Little Caesar played their asses off in The Pepsi Max tent.  It wasn’t a long set and they didn’t play Chain of Fools, but they didn’t need to.  When they played Dirty Water  from the new record American Dream, it just set in stone that this band is huge and will get bigger.  ZZ Top were lucky that these guys didn’t kick ’em in the face on the way by.  They should have.

Queens Of The Stone Age.  No Dave Grohl this time around.  Fortunately his presence or lack there of, didn’t take away from the band’s performance or very sick sense of humor that is the giant red-haired man, Joshua Homme.  If his musical career were to fail, which is not likely, ever, not on this planet anyway; Homme could make a very great living as a comedian.  He won’t ever need to do that.  Not a still person at the festival site while these Desert Rockers were atop the main stage.  They brought it.  Download sucked it into every pore.

Down were probably a big surprise for some.  A stage full of old thrashing guys is probably not a big draw for some of the younger pretty people in attendance, but Phil Anselmo is a bit of a legend and he made sure he lived up to his status.  A proud user of the work “fuck”, Anselmo instigated circle pits and head banging using the word well.  He did himself proud.  Even the far away people atop the hill stopped to take a peek at the former Pantera frontman deliver his growly swearing sermon to music.

Stonesour are not a side project!  This point needs to be made.  Corey Taylor is as completely dedicated to this band as he is to Slipknot.  Musically they are often similar, though Stonesour are not as thrashy.   Taylor lends his voice very well to this outfit and the songs are a little more personal.  Kudos has to go to Taylor for holding up the Slipknot show on Friday night so that “No friends of mine get hurt.  Not on my watch,” following the collapse of a barrier, not once but twice.  Taylor refused to continue until things had been fixed.

Jaren Leto is probably the best looking human ever.

It’s fact, not an opinion.  So, little wonder he and his fellow pretty people in Thirty Seconds To Mars draw in a big crowd.  Leto uses every inch of the stage and he can certainly work a crowd, but is this really just marketing genius?  Thirty Seconds To Mars are not the best musicians ever and the songs they produce are all very similar on listening.  Does it matter?  To use a word formerly bandied by Phil Anselmo “FUCK” no.  It matters not.  The people loved them and it’s all about pleasing the people at the end of the weekend!!

Alice In Chains had probably been written off by many in the crowd a long, long time ago.  What a hasty and foolish move.  25 years on the prowl makes for a great predator.  They sought out their prey and devoured them.  Too few classics missed and a crowd left wanting more.

Europe were seemingly greeted by a bunch of guys who sang; “de de der der, de du du der der” before each song.  It must be great to be remembered!  They do have another song too!

Limp Bizkit have been around a while and Fred Durst is very controversial at times.  The band cancelled for Boonstock in Gibbons, Alberta, Canada which played out to 14,000 two weeks after Download.  No reason was given.  Download didn’t give a shit.  Limp Bizkit performed to a crowd that wanted what it was they were giving.  Again, that really is all that mattered.  Verbal reviews of the band on site were all good and that they “gave it up like only they could”. That’s gotta be good, right?

Headliners cannot be an easy decision when, although a metal/rock crowd, everyone has their special favorite.  A bit like your favorite knickers, or the way you like your potatoes cooked!  Andy Copping, Download Booker and Festival promoter, works year round to provide the best pair of knickers that only he can.  Guaranteed, every time he announces a new band some cock will diss him on a social forum.  100,000 a day attend Download.  That just tells you right there that Copping is on to something.  He knows his shit.

A big thank you has to go out to the RAF, from everyone in attendance, for allowing a fly past by Spitfire pre-Iron Maiden.  Genius on the behalf of the Maiden camp, fabulous every time that the plane hits the skies.

Slipknot, Iron Maiden and Rammstein all made their mark at this years festival.  Till Lindemann made the bottle fight cease to be.  That has to count for something.  Each band is theatrical, each is musical.  Tight choreography and musical superbness is key as far as each band is concerned.  Genius is never far away. 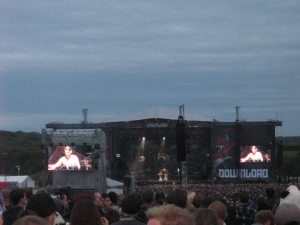 Gimp masks, Giant skeletons and Sadomasochism as standard should be a part of everyone’s weekend!

If you are a fan of just one then your weekend was made.  If not you need to earn to live a little!