Get another slice of this Femme Fatale

When the question is; Who is Superman? The answer is obviously Clark Kent.

So, when the question is; Who is Superwoman? The answer must be Lorraine Lewis.

OK, so our Femme Fatale front woman cannot fly, but she looks good in underwear, beneath or over her clothes and her hair is a lot nicer than Kent’s! So what if her ability to fly failed. Lewis more than makes up for her lack of flight with her endless passion and enthusiasm. It is obvious that when this stuff was being added to DNA at conception, Lewis managed to get at least four times more than a regular Joe Blow. This gal could sell a totally mouldy loaf of bread to someone for $25 and still get a tip. She just oozes self-confidence and optimism. If you get close enough you can smell it. Of course Lewis also bagged a horny, sexy voice, a fabulous figure and great personality. Some people have all the luck, but some people also work their asses off to achieve and Lewis, however fortunate, is no shirker.

Fronting Femme Fatale, an otherwise all male band, with Rick Rael (Lewis’s brother) on bass, Bobby Murray; drums, Mazzi Rawd; guitar and Bill D’Angelo (deceased), took balls bigger than most of our readers will ever dream of having. Signed by MCA in 1987, the band had only one full CD release, aptly named Femme Fatale, from which came the singles, Waiting For The Big One and Falling In And Out Of Love. MTV loved the raunchy front woman and her hair band and Lewis was aired on full video rotation…. often! Frequently compared back in the day to the Vixen ladies, Lita Ford and Doro Pesch, Lewis could not only belt out a kick ass rock song, but she and her female peers were up against the best of the cock rockers and she could hold her own as one of the best in the business. Alas, the reign of Queen Lorraine was short lived at the helm of Femme Fatale, but Lewis was and still is a class act and for that very reason, she is still high on the list of people to contact when a female voice is needed for a singing project. 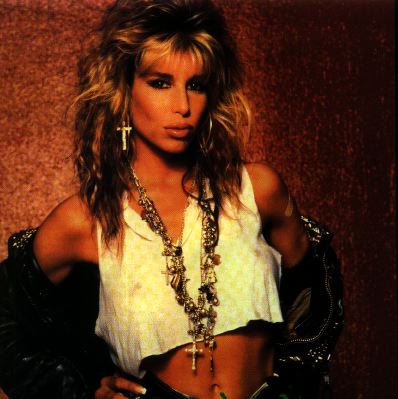 LA Guns have recently been in the studio and called Lewis to record with them on a song poised for a new release. When asked, Phil or Tracii? Lewis was quick and concise in her answer, “Team Phil (Lewis, no relation), every time. He is the voice of LA Guns, undeniably. Tracii (Guns) is great, but it is all about the voice in this game and you cannot deny that Phil just has it vocally. He was, is and always will be the voice of LA Guns.” Is it his quintessential Englishness perhaps? She went on to say, “music from that era, the mid to late 80’s is timeless, just like the look, the sound. Stacey (Blades) arrived at the studio in his big pink car one day, with a scarf around his head and one hanging from his waist. It definitely is in the genes, it never goes away. You gotta love it! ”

Blanca White also recently commissioned and utilized, among others such as Paul Shortino (Quiet Riot) and Jeff Paris (Cinderella) the unmistakable voice of Lewis on two songs for Resurgence Of Rock.

A project spearheaded and funded by international lawyer Ken Savage and brothers Austin and Rick Schell. Music fans that had a determination to hear original old school rock and roll and who saw this two year project through to a sweet result. It would seem that Ms. Lewis’s voice is also standing the test of time, it is easily recognizable and it still able to make hot blooded men…. and women everywhere, stand to attention!

Lewis has of course has had her own music projects through the years and one of those, LA Nookie has featured such talent as Alex Kane (Marky Ramone) Lisa Leveridge (Courtney Love) Share Ross (Vixen) and there are possible plans for more from the outfit, with a possible appearance on drums from Roxy Pettrucci (Vixen). “What I would really like to see is for Roxy and the rest of Vixen to play together again, but it won’t happen. Jan Kuehnemund just won’t hear of it. I guess she is happy with doing her thing, but it’s a real Fucking tragedy.” The passion and love for her peers is just about brimming over when she talks about this. “I say what I think, always have. What is past is done, get over it. You know, people want to see these bands and you won’t get over shit that happened years and years ago, it’s so f*!king crazy!” Music really is the first love of her life and Lewis becomes animated and a touch crazy sounding when she talks about it, whether it is her project or another close to her heart, her allegiance lies deep.

But music is not all that superwoman is passionate about and Lewis wants to share the newest of her passions with anyone who will listen. “Over two and a half years in planning, development and sales.” Lewis exhales. “I can finally announce the arrival of Ex-Wives Of Rock, co-produced by myself and my best friend Lisa Brucker, with Tricon Films and Television, for the Slice Network in Canada. This is a reality show, starring Bobbie Brown (Jani Lane, deceased, former singer with Warrant ), Sharise Neil (Vince Neil, Motley Crue), Athena, in her own right a musician, writer, host and sister of Tommy Lee and and Susan Blue Britt Dixon (Jerry Dixon, Warrant).

Lewis revealed that “It was a big adjustment, being behind the camera. I love having my picture taken, I love being out there in front of people, in front of the camera, but as soon as I realised that I could show up to work in my Vans (tennis shoes) with my hair up in a pony-tail, that I was given a certain freedom and it was the cast that were in hair and make-up for hours. I liked that, it was a refreshing change. (She laughs out loud) The freedom didn’t stop anyone knowing who was in charge though.” In front of, or behind the camera, Lewis remains at the helm, always the star!

When you take a look at the previously mentioned cast, you will realise they, like Lewis, are really not in need of too much hair and make-up attention and Lewis’s maternal instinct, total adoration and enthusiasm for her girls animates her, when she explains her choice of ex-wives. “These girls owned the strip (Sunset Boulevard in Hollywood, LA) back in the day. They had the look, the guys, oh, they just had it. So, having known each other for years and with each one having been married to and divorced from prominent rockers of the day, it was just a natural group to get together. You know, separately they are all mostly cool and collected, but throw these four girls together and things just get out of hand. It is pretty crazy.” When Lewis shared this with Headbangerwoman, she was waiting for a couple of shows to be released from post production. She had not seen anything totally finished, but the anticipation in her was un-believably evident. “This show is just going to make such great viewing. It has taken so much time and work, from everyone involved. I really was not aware of just how much time it would take, I was not really ready for it. I had actually got another project in the pipeline, then this project took over. It was so worth it.” 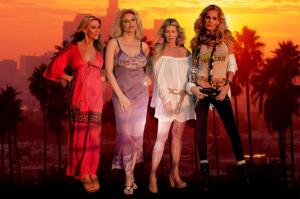 Sadly, Jani Lane, ex-husband of Bobbie Brown passed away while filming of Ex-Wives Of Rock was taking place. Lewis was unable to discuss this with Headbangerwoman. But it is possible that the show may have its very own Sex, Drugs and Rock n Roll, who dunnit, play out in front of millions of viewers? You will have to wait and watch to find out!

Not able to leave the music behind in totality while becoming involved in TV, Lewis, along with Lee and her son Miles, himself a drummer with LA outfit, Bad Suns, also put together a possible theme song for the show.

Ready for release in Canada on The Slice Network, August 31st 2012, back to back episodes airing at 10PM EST, viewers can expect to see a plethora of meltdowns, mystique and mayhem with added bitching, bums, boobs and Botox. But with a further three projects in the offing we can expect to see more Lewis produced TV in the not so distant future, so what about a visit from Femme Fatale? Is there time? “I just got my contract back from MCA (heartily laughing) my writing has not got much better and I am working on getting the masters from our recordings too. You know, we made a second record that was never released, so it would be great to release that. I would really like to update the sound to make it relevant to now, on the first record too. I don’t mean completely change the sound, but just use some of the technology we have available now to bring it into the present. Of course, 2013 sees the 25th anniversary of Femme, so we are already talking shows and line ups in anticipation of some live dates. It may happen sooner, but with my already crazy, busy schedule, it may have to wait just that little while longer and a 25th Anniversary would be a great time for things to happen with Femme.”

Femme Fatale have recently announced that they are appearing on The Monsters Of Rock Cruise March 16-20 2013, the website link is below.

Maybe not so Superwoman, but she is still THE Femme Fatale!