This tiddly bloke had a great time at CES Vegas, and likely won’t even remember.

He got up on stage with Foo Fighters and swigged Champagne brought to him by Pat Smear, at the request of Dave Grohl.

He then “danced” to Faces cover “Stay with Me”

It turns out that what happens in Vegas, is less likely to stay there since social media took a hold….

Royal Blood make loud noise that you will doubtless nod your head and tap your foot to.  Unfortunately, it is everything that Jack White has already written.  This band is not The White Stripes, nor is it The Raconteurs.  Even the lighting tech didn’t realise that Royal Blood were on the stage, failing to dim the lights for a good half ofthe first song…. Their backdrop appeared quite a while later.

While the English duo can hold the attention of a crowd there is nothing original going on here.  Any gimmicks and frail attempts at showmanship or humor are wasted.  This band/duo are warming up the crowd.  That’s it.  Move along.  Not much to see here.

“Are YOU…. FUCKING READY?” came the multiple screams before the Foo Fighters appeared to assault the eyes and ears of a capacity crowd.  Dave Grohl, now appearing as Daveros atop his throne.  The rolling seat contraption was made for him after a little mishap in Sweden earlier in the tour, which caused him to fuck his right leg up, good and proper.

Dr Who fans will get the joke.  The rest of you have Google, so use it!

Opening with Everlong, the band could have sat back and listened to the entire set.  Foo Fighters were giving their all and the crowd were feeding on it, delivering above par vocal throughout..  The look in Grohls eyes during a live show is very telling.  Emotion still gets the better of him whenever the crowd take over.  He really is still just a fan.  He still doesn’t quite get that he is revered and deservedly so.  It’s a great thing to be witness to.  He doesn’t take his being on stage for granted and he works his ass off at every show, to give you what you pay for.

More than one song in the set tonight became an extended version.  Maybe it was a little too much?  Overkill perhaps?  Gauging on the fans reactions…. Not a fucking chance.

Six songs in and Grohl told the story of his broken leg, including a slide show and noises to give the full effects.  Hilarious.  He admitted that his leg X-ray quickly became merchandise in the form of a T-Shirt and pointed fans in the way of the merch stands….  This guy is spot on when it comes to marketing.

Drummer Taylor Hawkins brought his teeth and his falsetto to the show, in only a style that he can.  His blonde hair flowing rhythmically, as he beat the living hell out of his drums.  Bassist Nate (Mendel) is still (as once described to the author of this article, by Krist Noveselic, on Twitter) great..  Rami Jaffee accompanied the entire show fanatically on his keyboard.  Jaffee is certainly the Foo equivalent of Boom Gaspar, of that there is no doubt…

Guitarist and former Germ; Pat Smear, grinned inanely through the whole two hour, forty minute set.  This dude always appears to be the happiest musician on earth, but one has to wonder, with the evidence in his lack of dancing rhythm, if he actually ever has his electric guitar plugged in?

Smear played Times Like These excellently on his acoustic guitar, after accompanying fellow guitarist Chris Shiflett to the front of the catwalk.  Grohl came too, but he traded his guitar for crutches for this number and just performed vocals, while swinging the crutches precariously in front of his band mates throughout! 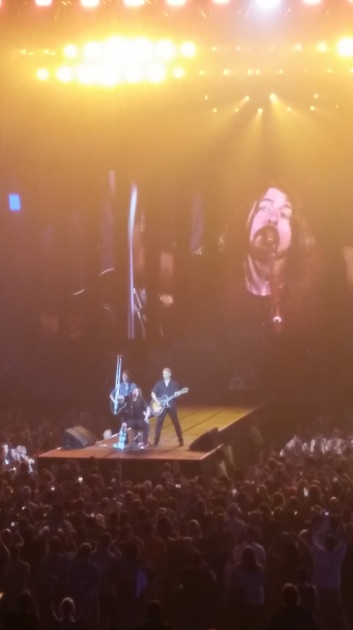 Asking the audience how many of them had seen the band previously was one for the books.  Apparently, many of those in attendance had not been aware of the bands existence until Sonic Highways was released in 2014!  “That’s great, we’ve only been a band for twenty fucking years” exclaimed Grohl, almost tongue in cheek.

Covers included Under Pressure; Queen and David Bowie and Stay With Me; Faces/Small Faces.  And a first for Smear performing Have It All, a song the band had not played live since 2008.

Of course everyone has heard by now about the Rush song Tom Sawyer, and the performance by Foo Fighters/Rush fan Brian Roberts.  Grohl requested that a fan come up from the crowd and sing for the bands cover, what he didn’t expect was that a karaoke fan would stand next to him and blow the roof off Rexall Place.  The look on Grohls face was priceless.  Rolling Stone even covered that story!

Taking time at several points during the evening to sign autographs for a couple of third generation Foo Fighters fans, (these young ‘uns were no older than five) Grohl showed that he really is about the fans.  He does give a shit.  He will stop his show midway to do the right thing.

Finishing with Best of You, FF waved adios to the crowd and Smear quickly lit a cigarette before exiting stage right….

A must see live show, if you ever get the chance.  Foo Fighters deliver 150% EVERY time.

Coming to a close..

With the end of 2014 upon us, we can look forward to a cracker of a start to 2015.
Coming next year we will bring you, among many other things, live reviews of Black Label Society, Metz, and Death From Above 1979, in Edmonton. Sleater-Kinney in Los Angeles, and back to Edmonton for Foo Fighters with Royal Blood.
Until then….
Have a very Merry Christmas, and Happy New Year.

Dave Grohl, the next leader of the world, admits to shedding tears when he went back in history. 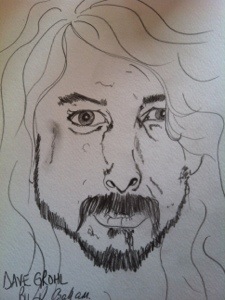 Sound City; a movie about a sound board.

A Movie by Dave Grohl.

If this guys continues on his path of world take over, we will soon have cookery books, underwear and beard trimmers, all by Dave Grohl.

Let’s face it, there is no-one on earth who does not like Dave, except perhaps the widow of the late Kurt Cobain, otherwise known as Courtney Love…

Sound City is a movie quite unlike any other.  A movie about a dirty, piss covered, whiskey splashed, dank building, which in a former life was a packing factory.  The backdrop is really of no matter, despite the title of the movie.  The cast is A list musicians, Nirvana, Neil Young, Tom Petty, Rick Springfield, Fleetwood Mac, Nine Inch Nails.  That too is slightly irrelevant.

The story of rags to riches musicians, of trial, toil and tears is important, but what remains of utmost  interest, the star attraction, the story of a sound board, the very tool that brought music to all of your ears.  That is what is important.  The musical history contained on a board covered in knobs and buttons.

Even if you are not a fan of Foo Fighters, Dave Grohl or even Nirvana, you would be missing out on a large chunk of musical history if you were to not watch this movie.  Reminisce, rekindle and rip that volume up to the max.  Your inner Butch Vig demands it.