Remember to please be respectful as asked.

“Pretty damn good man!  For an old Sabbath fan from the day, it was worth every penny!”  That’s how music fan Don Mason, is telling it today, after attending last nights appearance at Rexall Place, Edmonton, Alberta, Canada by Black Sabbath.  A SOLD OUT show!

In all reality, it’s fairly impossible to give Black Sabbath any kind of review at all.  They are after all, Black Sabbath.

Anyone in attendance at a show is lucky at all to be able to see any of the musicians in this particular line up at all.  While the most recent record 13 was being made, front fellow Ozzy Osbourne had an addiction relapse, which caused a hiatus between him and Manager/Missus Sharon Osbourne.  Guitarist Tony Iommi is still undergoing cancer treatment and (ex) drummer Bill Ward told Ultimate Classic Rock he just flat-out “wouldn’t sign a contract!”   The band tell a different truth.   Thank fuck for bassist Geezer Butler!  With Tony Clufetos behind the drums, Ward was barely a whisper in the wind.

Osbourne has had the same lines on stage for at least the past 25 years, with or without his Sabbath band mates..  “I love you all” and “I can’t fucking hear you” are tried and tested phrases for the iconic singer.  They work.  The crowd shouts louder and they love him right back.  At 65 he can still belt it out.  His voice barely wavering from that of a young Ozzy Zig many, many moons ago.  He no longer needs a gig!

Of course, after years of substance abuse and ant snorting antics, you sometimes wonder if he’ll make it to the other side of the stage, clapping and grinning maniacally…. but he does and the fans egg him on to get back to the centre of the stage, in time to sing the next note.

A standing crowd, right from lights out at just before 9pm 10:50pm, or there about and the atmosphere was electric.  There were fans like Mason from back in the day and fans as young as four or five years old, to be seen in the crowd.  The latter, probably not enjoying the topless women that were present on the monitors throughout, as much as the former!   Tits always make everything better!

Opening with War Pigs and closing with Paranoid, the evenings set list was a no surprise, no frills affair.  The classics were just that, the newer tunes less revered, but still very well received.

Black Sabbath were never a particularly theatrical outfit.   Ronnie James Dio, who replaced Ozzy as the singer during a transition was a great vocalist and superb performer, but his style was so very different and let’s face it, we all know that Osbourne really is the only guy for this gig.  Black Sabbath was always about creating atmosphere and other than Osbourne, no one could give that individual, dark, maniacal, and classic feel.

After the loss of two finger tips in his youth, Iommi  had to construct himself prosthetics/finger tips in order to continue playing guitar.  It was this accident that caused his style and playing ability to change, giving the distinctive sound that others have tried and failed  for decades, to emulate.

Bassist Butler really has no story.  He doesn’t need one.  He is the bassist with Black Sabbath.

After show end last night, the band hopped on a flight to LA where they will finish up this leg of the 13 North American tour.  It’s unknown when, or even if they will be around these parts again.  If you were in attendance you were a part of some serious musical history.

Not there? Massive Fail!

gone to the dogs, pizza anyone?

In this day and age, you can consider yourself lucky to be in one band that is recognised.  ToP DoG, Loren Molinare has been in a successful rock band and is currently playing his punk band The DoGs, to an underground fan base in Japan, where they previously played in 2007 after they found that 28 punk bands were having dog days and had put together a cd called Doggy Style, on Future Now Records, featuring nothing but The DoGs songs!  “Who knew, a tribute to ThE DoGs?” exclaims an illuminated Molinare.
The box set is out now under the name Doggy Box containing Doggy Style +Live LA to Tokyo+ and the new The DoGs Unreleased; lost tracks from the 70’s. The band just got back to North America from a short promo tour in Tokyo.

Photo from the UFO Club/Tokyo Feb 10, 2013 courtesy of Loren Molinare/ The DoGs

Raised in Detroit his roots were in dirty punk, so he was always allowed to be a little confused.  Iggy and The MC5, Motown and The Who were all in the musical listening range of the writer/guitarist/vocalist and each had an impact on him.

“When we first got together as The DoGs we were 16 or 17, we didn’t know what we were doing.  No-one liked the name and we loved that.  We were before the Ramones.  In fact we are just now going through a trunk full of music that was like the Ramones before The Ramones.  Mary Kay, who plays bass, was Suzi Quattro before Suzi Quattro.

In the late 60’s ThE DoGs opened for The MC5, The Stooges and Ted Nugent.
In the 70’s in New York, ThE DoGs opened for Kiss, The Stilettos and Television
Soon they hauled themselves to the west coast where they landed gigs opening for AC/DC, Van Halen and The Ramones.

“We actually ended up squatting in London, UK at some point.” Molinare tells; “ We had a deal that fell through.  We sold everything and the band lived in extreme conditions.  We barely made it through three months.  All our roadies left and I figured I was destined to stay in Michigan and farm!”

The farm didn’t come to fruition.  Instead Molinare and his Dogs moved back to LA…
“Another attempt to get signed was made.  It was almost in the bag with Atlantic Records, but as fate would have it, Atlantic did not sign the band. At that point band broke up, or took a rock and roll hibernation, while the world could catch up.”
It just so happens that the world did catch up and in 2000 Dionysus Records released Fed Up, a compilation of  DoGs singles and outtakes. Then in 2002 a new full length named Suburban Nightmare came out.
With the band playing big events like SXSW in Austin 2009 and the NXNE Festival in Toronto also 2009, things looked great and in Jan 12 the band released the LP Hypersensitive, on their own Detroit Records.

To those of you around to live the 80’s will doubtless remember Little Caesar.  Tattooed and long haired, with a denim and leather wardrobe and two wheeled transport.  Their song Chain Of Fools, an Aretha Franklin cover charted Billboard 100 and was critically acclaimed.  Loren Molinare is also the guitarist with this very band! 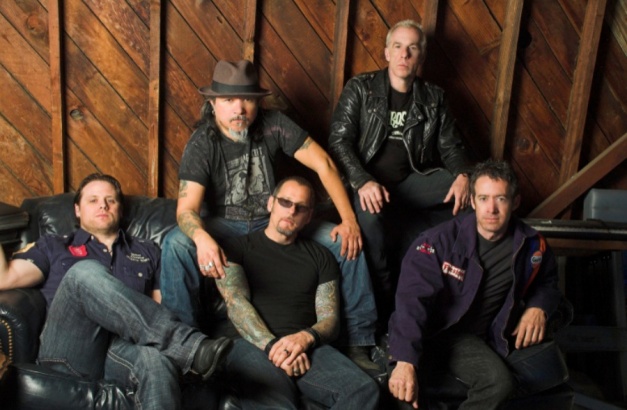 Has Molinare got multiple personality disorder?  “I think I will have that put on my tombstone.”  He agrees.

Having toured Europe with both bands, Molinare has seen the good and bad.
“On stage we always used the audience as a barometer.  When Little Caesar was with Geffen, they didn’t take enough notice of that.”

Molinare goes on to tell;
“Even though our second record, which was the first to feature Earl Slick, (Guitarist on David Bowies new record) Lucky, was critically acclaimed in the UK and we sold out the Marquee in London and all the dates on the 1992 tour.”

Even then…
“They didn’t print enough copies of Lucky.  They were already on to the next thing, which at the time was Nivana.  If they had stayed believing in us, we would have shown them how it’s done.  Back then the record companies owned bands.  It’s different now.”  Molinare is quite matter of fact.

Of course Little Caesar were on the cusp as it were.  Hair metal was phasing out, Seattle Rock was breaking through.  Little Caesar were neither here nor there.  A little scarier than their made up hair counterparts in Poison and Ratt, a little cleaner than Kurt, Krist, Pat and Dave!

“Back then Geffen, in fact all the record companies, wanted instant gratification.  We lost Apache and Earl Slick came and went… It wasn’t so easy for us.  It was sad that we imploded  from the lack of record company support and way too many expectations to be the next big thing.”

“In the 80’s in LA all the guys looked like chicks.  Geffen tried to change us.  Of course they gave us a lot of fucking money too.  They tried to clean us up by sending us to Vancouver.  We just ended up scaring kids with our facial hair.”

Little Caesar toured with Kiss, Social Distortion, Billy Idol and Janes Addiction, to name but a few.  A sold out headliner at The Marquee club followed.

The personal toll could have been much greater if Little Caesar had continued to try and climb the ladder and when the demons started to show a little too often, Little Caesar played their last show in Las Vegas in 1992.
“We lost sight of who we were as a band, because of all the record company stuff and I think especially when the band members starting leaving or quitting, it got to be too much and we broke up.”

Molinare aged 40, took a year to figure it out.

“I had been attached to my guitar since I was 9 or 10 years old, it was my identity.  I put it away for a year and found it to be a good experience.  I’m not saying it wasn’t daunting.   I had a family to support, you know and I needed to find out who I was as a person, without the guitar.”

Luck on his side,Molinare found a job with Ron Young selling Groove Tubes.  No suit and tie were required and he landed at NAMM the following year.
“I was inducted.  It was like, welcome to the graveyard of signed musicians.  The best of it is we all get a paycheck!”

NAMM has remained a yearly retreat for Molinare, he works in the music business as not only a musician, but as an advocate for the products he uses; Product Manager for Blackstar Amps for Korg USA in the US.

As with The DoGs, Little Caesar has been resurrected.
2010 saw a new release titled Redemption, which was promoted by live performances in the UK and Europe.
2012 saw yet another release, titled American Dream, which was followed by a European tour.

Molinare just finished recording with Mike Hudson of The Pagans, Jimmy Bain of Rainbow and The Ronnie James Dio band and Reckless Dave Liston, to mention but a few..  Reckless Dave and The Burning Rings Of Fire are not scheduled to tour as this point.