“Love To Hate You is the happy song on my new record, Living Like A Runaway.” Lita Ford told her producer when he asked if she could write some more happy songs for the record. Ford laughs when she tells of her reply to that request. “I love to sing that song. It is my happy song on the record!” Compared to titles such as Hate and A Song To Slit Your Wrists By she is not wrong.

“After almost seventeen years in a controlled relationship, this record is a blessing.” Ford shares. “My ex had pretty much forced me to record just after my hiatus, that record wasn’t me. I didn’t want to do it.”

Living Like A Runaway sounds much more raw, intense and aggressive. This really is a return to the Ford of old.

“This record is long overdue and is pretty much a gift from God,” Ford offers Headbangerwoman. “It’s a survivor record, so deep. It has already touched so many lives. People are telling me that they are so pleased I made this record; it is making a huge difference for them. It’s a record for the happy times and the tough hard times. It really is an emotional record. It is very difficult to explain it.”

There have been many tough times for Ford, who by her own admission used to “ditch school to go off and jam at other peoples houses,” she interrupts herself, “not that I condone it.” As a result she failed to get enough points for her Graduation. “I was lucky. One of my teachers saw that I really was working towards my music career, saw me in magazines and realized that I was going to be someone. As a result I was awarded my points.” She laughs hard when she says, “I had my Dad pick up my Graduation certificate because I was on tour with The Ramones.” 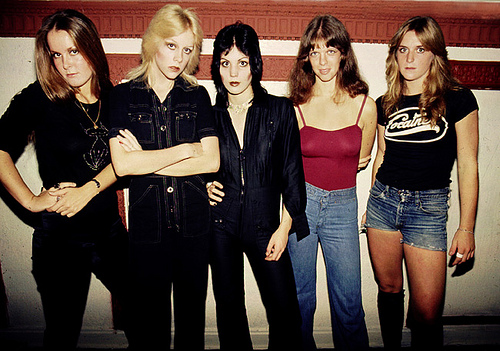 Of course soon after Grad came The Runaways, an all-girl outfit manufactured by Kim Fowley. Ford describes it as a classroom… “You never always like everyone in your class, but you have to be there and you are given the daily task of being with them. You don’t always like them. We were not close. We got on to a point, but in the other direction we were given to bicker. We were chosen for that band, but we were not chosen because we got on well. Of course, the Runaways are probably more popular now that ever we were back then. We really were way before our time.”

A 2010 Movie about the 70’s girl sensations, Joan Jett, Cherie Currie, Sandy West, Jackie Fox and Ford named after the band has not been watched by Ford and she sounded doubtful as to whether she would give it viewing time.

“I heard there was a scene where I was portrayed as kicking someone in the stomach.” She tells. “I have never kicked anyone, not even so much as a dog in my life.”

It is documented that Cherie Curries memoirs were used for the movie… So, it was put to Ford. Where then do you suppose the producers farmed the information for content relating to you in the movie?

“Well, probably my ex-husband,” laughs Ford, but you can hear the hidden concern in her voice. It was a relationship which ended badly and would seem to be still being used to attempt to continue the control.

Several of Fords relationships were public and out there for the world to see and judge. There was an engagement to Tony Iommi, a live in relationship with Nikki Sixx and a marriage to Chris Holmes. Not to mention last husband Jim Gillette.

“It’s a great story, the way I met Nikki. It was a girls night, a few of us were sitting around the table and one of them asked; who would you really like to be with in here? Nikki walked by; this is before Motley Crue, with scrawly hair, all rocked out and I took one look and said, probably that guy there. So they say go and talk to him and I did. I went over and said would you like a qualude? That is how it happened. Nikki is still super cute!”

So does Ford prefer to be single? “I like to be single, but not alone. You know I spent seventeen years in a relationship with a control freak. You can’t really control me! I’m really not controllable. These days I live to work, for my music and my fans.”

A very hard worker Ford admits; “I have only been back in my own bed for two nights.”

No, no, you dirty buggers. Ford was in Las Vegas for Rock N Roll fantasy camp. “It was really just a bunch of old rockers,” she chuckles. “But seriously, Gene Simmons was there, Kip Winger, Rudy Sarzo, Zakk Wylde, Sebastian Bach and Phil Soussan who is always at these events. Phil is a very talented musician, so giving and such a great guy.”

Soussan is certainly not the only talent in this article though. Lita Ford started playing guitar at age eleven. “I would sit in the living room and Mom and Dad would be watching the TV. I have lived with my guitar since. Of course back then the only real female role model was Janis Joplin. There was Pat Benetar and Chrissy Hynde, but they were not guitarists, they were from a totally different musical vein. Both were, still are great, but no other women were shredders, they were not metal. I was really the only one at the time!”

Continuing on her path of hard work and music making Ford is all set to appear and show off her shredding skills on The Monsters of Rock Cruise in March 2013. She sounds excited when she tells Headbangerwoman that, “I have never been on a cruise before. We are playing two shows in four days; there probably won’t be much time for relaxation!”

Not having a role model didn’t dissuade Ford and she has had a very successful run as the premier woman of metal, a title she has held tightly and deservedly since the 80’S! Herself becoming a role model for 1,000’s of women and men alike!

Ford is in negotiations right now and will hopefully be sitting down with a writer on November 1st 2012, to begin the penning of her book which will be published by Harper Collins.