Charley (Guitar) and Jonathon (Drums)the Los Angeles band Dirty Cakes, answered a little Email interview that TiTT sent them.   It certainly was interesting to see the answers!   We are sharing them with you here!
TiTT asked; Does flannel make you write harder?
Charley answered;  “Rock and Roll at its core is about one thing, and one thing only… SEX.   It’s also about Drugs and The Devil, but those are ONLY a means to an end.  By definition, being a Rock Star is sexy… and nothing but NOTHING, is more Rock Star than jeans and a T-shirt with a leather jacket!
As the great warrior poets Saxon once said…’Denim and Leather brought us all together, it was you that set the Spirit Free.’

We live in the promised land, Los Angeles, and when it gets frigid cold, when our bones are shaking and our fingers get numb, you know, around 50F, flannel is great for warmth… its comfortable, practical and a good set of flannel can be your best friend when you’re alone and the world doesn’t make any sense.”
Jonathon added;  “Well, it definitely adds to the chaffing when I’m playing drums in my flannel long johns.  I don’t know about writing harder, but it definitely allows us to sweat harder which makes the cake that much dirtier…and saltier.”
TiTT readers like salt….
TiTT told Dirty Cakes that they had baked a cake yesterday, it was flat!  Our readers need to know, why are yours Dirty?
Charley didn’t mince his answer;  “We have a very strong punk rock ethos, we believe in the classic grunge philosophy of sarcastic metaphor and antiphrasis.  If either of us were ever the epitome of our namesake, it would probably be the end of us.
Jonathon took it to the toilet;  “Many assume it’s a reference to urinal cakes or erotic cakes in the shape of genitals.  To be honest, I feel our name has a long-standing and rich cultural ancestral meaning associated with the poorest of the poor who wish they could afford EZ bake ovens.”
We here at TiTT listened to the Dirty Cakes EP.  Queens Of The Stone Age are obviously a big influence, but, we hear Creedence Clearwater Revival and David Bowie too.  Can you see your sound changing and evolving over time like QOTSA and Bowie?
Charley answered first;  “First off, BRAVO and thank you for putting us in such immaculate company with some our greatest influences.  Our sound will most definitely evolve, we’re excited about our upcoming EP and the growth that it will show between us.  It will hopefully garner in a whole new slew of fans  and educate the children on some of the finer, more psychedelic shades of the devil’s music.
We hope our next effort will expose our childhood and teenage roots in The Zombies, The Pixies, Alice In Chains and The Vines.
Jonathon came in a very close second, almost in stereo…  “I echo Charley’s sentiment and thank you for the comparison.  We pride ourselves on our diversity and open-mindedness to influence.  I think a real fear for us is to put out an album of songs that entirely sound the same.  As some artists evolve from record to record, we desire to evolve from song to song.  If it’s not obvious that our sound has and will evolve from song to song on the next record then you’re not listening to Dirty Cakes.”
I’d Luv To See You Nekid is the EP discussed above and it’s well worth.  Follow the Bandcamp link below!
Of course there was a bit of a hoo ha at Grammy this year, we at TiTT put it to them, no holds barred;  What do you think of The Grammys?
Charley answered  “Well that strikes us as maybe a loaded question…  As sponsored musicians of The Grammy Academy’s MusiCares program, we owe more than we can express in words to their organization.  Do we maybe disagree with some of the awards given out, of course, but art is always subjective and anything that gets children excited about music is FUCKING AWESOME!  Our definition of good music is something that gives you a visceral reaction and Grammys annual live show excites a wider audience than any other promoter could ever imagine… and without their awards, kiddies the world over would lose something magical to aspire to.”
Jonathon, who is now not eating urinal cakes at this time, went on  “The Grammy Academy’s MusicCares program helps and saves the lives of numerous musicians annually.  They have personally helped me and I am forever indebted to focusing on my work in music to compensate for that aid.  That being said, an award for art requires that the genre of art that you’re investing your heart and soul into be respected equally with all the other genres who get their fair share of onscreen time without interruption.   I’m saddened to say that the way Queens Of The Stone Age, Lindsey Buckingham and Trent Reznor with Nine Inch Nails were treated at this most recent Grammys, was an absolute shame and travesty to the whole program.  I’d still gladly accept a Grammy if I ever earned one.”
TRAVESTY, yes!
We put it to Dirty Cakes that; they describe themselves as psychedelic desert grunge rock.  So, Lets play word association:
Charley said;
Psychedelic;
– Group Sex, Soft Drugs & Rock and Roll
Grunge;

Roar your big block 2 hours past skull rock, take a left at the 3rd cactus and crank Chuck Berry till the woofers in your door shred themselves in the dust and dirt.  Don’t stop till you find what it is that you’ve been truly looking for and don’t let the sun find you.
Jonathon was obviously not quite as horny!  He replied;  “Psychedelic Desert Grunge Rock means hard-boiled, blaring, intense, punk-rooted, in-your-face, melodic ear-humping to your brain, heart, and soul simultaneously while being very thirsty.”
That said, do you prefer cake or rock?
Charley, once again, straight to the point  “They tend to be very similar, when its shit, its shit… and no amount of sugar can polish a turd.  That being said, if you made us decide between Black Sabbath or Chocolate Cake, we’d take both, cuz rules weren’t meant for breaking, these boots were made for walking and nobody puts baby in a corner.”
Again, Jonathon is a little distracted;  “What kind of cake? What kind of rock? Fruitcake? Crackrock? No, thank you.”
We have to wonder if at this time Jonathon has gluten allergies… However, we continue to question 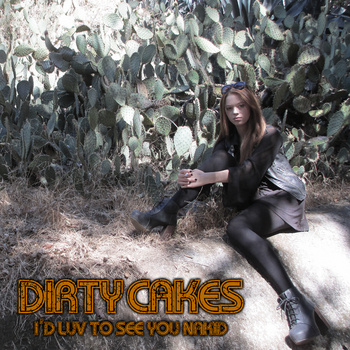