In 2014, Mother Love Bone will be eligible for induction to the Rock and Roll Hall of Fame.

In 1989 they supported The Dogs D’Amour on their first tour of North America. 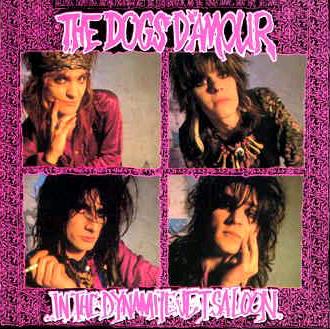 The Dogs D’Amour had an almost obsessive, cult type following in the UK and Japan in the mid to late 80’s and they could have been huge.

The remnants of Mother Love Bone became Pearl Jam.  The Dogs D’Amour stayed honest and did not sell out.

“Back in the day, major labels in the US would pay to have bands tour with more established outfits, when they wanted to get exposure for them… The Black Crowes supported us too.  Reportedly we got paid $10,000 for that tour of the UK.  We didn’t see a penny of it.” Scoffs drummer Bam.  “Our Management nicked the lot!  Looking back, we could have toured with some massive bands but we stayed honest, true to ourselves and of course, we were occasionally drunk!” Bam tells a great story and his smooth London accent just makes for a better delivery.  “Tyla and I (J Pallas, Dogs D’Amour singer and artist) could sit in a room with six other people and pick out the two most thieving horrible cunts every time.  It’s just a knack we have.  This time we’re keeping it in house.  Let’s just say we will be mis-managing ourselves.” 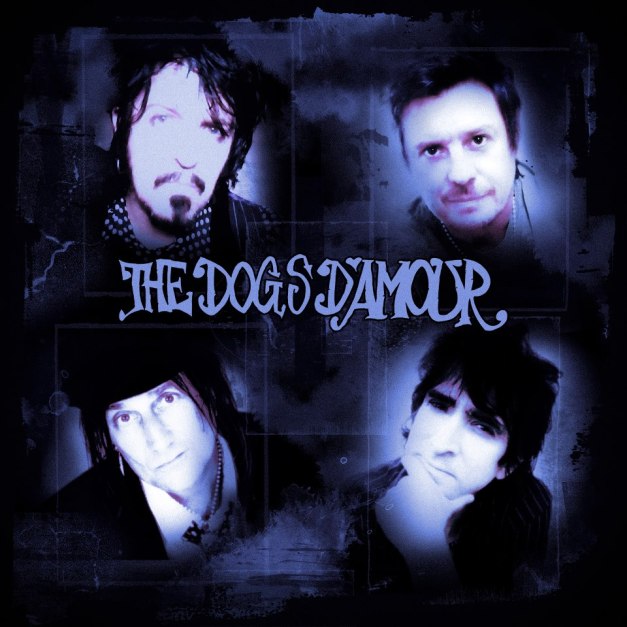 “We always were misunderstood,” explains Bam when asked about their music.  “We were really nothing to do with heavy metal.  We were always more of a blues outfit.  Better suited to touring with Bob Dylan or Tom Petty.  We made well-crafted songs and we intend to make some more.  The rest of the band will be coming out here to Florida before the tour.  We will jam, write, maybe record and work on some video.  We may be able to pull out a single or maybe an EP or who knows?  I would love to bring in the heavy artillery, a well-known engineer, I don’t really fancy doing it all by myself.”  Bam and his good lady wife Share (formerly Pedersen) formerly Vixen, now with JSRG, have a studio where the two produce and engineer part time.

“It’s been quite a long haul putting together songs across the internet, but I’m really proud of everybody pulling together. It has been a process of learning how to collectively work the technology, along with learning to work with each other again in this strange new way. It’s still not as quick as it would be if we were all in one room, but we’re getting there. If we actually create a new product it will be a miracle!  There will most likely be thunder and lightning, tea, ‘n’ cake with the Pope where we all get Saint hoods!” Bam exclaims. 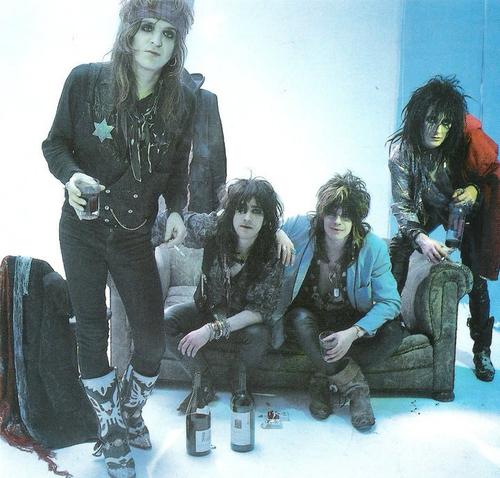 “We will probably have an exorbitant tea bill this time around.” Laughs Bam.  “I hear Tyla drinks a lot of tea now.”  He continues; “no-one really drinks hard liquor these days, the odd bottle of red wine maybe.  I was even thinking about writing a letter to our ex-groupies.  You know, to warn them that there will no longer be an aroma of marijuana and Jack (Daniels) on the tour bus, more likely the stink of stale urine… and watch out for that wheelchair honey!!”

Moving on with life hasn’t restricted Bam in any way.  Time has made him sit back and reconsider on more than one occasion, he diversifies well and adapts to the new and different quite easily and quickly.  His skills also include raw cuisine and making silver jewelry.  Bam tells Headbangerwoman how his love for crafting silver started.  “I was in Brighton, England.  I was down on my luck after the Dogs broke up.  My ex had gone back to the US with our son, my first child.  My friend Mini put me up. He’s still out there, Mini, top bloke.  Mini worked for a jeweller and had a small set up in an attic room.  It had a small window for the solder smoke to escape.  I loved to work the silver, but after a while I returned to the US to look out for my son.  It was there in Los Angeles, that I met Share.  She had a small shed type building and she let me put a work bench in it.  I didn’t even own a mandrel at the time.  I used a drumstick.  The first ring I ever made was made there; it became a kind of engagement ring for Share.  She still has it.  At one Bubble gig, she hit a 300 pound bouncer in the face with it and saved the day, but that’s another story.” 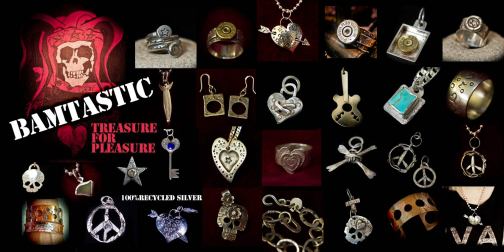 That was back in LA.  Things changed; Share’s Mom and Dad passed away, as did Bams Dad.  “Bubble gigging at the same old LA clubs was pissing us off, our credit card was maxed out after tours of Japan and the UK and more importantly, getting out to the beach would take two hours.  The traffic in LA became so restrictive that we turned into homebodies, never going out, we were just watching movies and writing.”  Bam’s voice sounds a little bitter when the West coast is mentioned, but quickly returns to chipper  when the new chapter in his life is discussed again.  The silver was set aside for a time, but is now back in production.  “ I’m lucky,” Bam tells.  “I have a lovely house with a garage now, I’ve been making jewelry again since January and it has helped me reconnect with old friends and meet new ones.”

After living in Los Angeles for a time, came the big move to Florida.  You have to wonder, how did that happen?

Bam gets excited to talk about this.  “We made the move to Florida after we had been to the Caribbean on holiday.  We loved the climate, loved everything about it.  We initially talked about making the move but it didn’t happen.  Then we went to see friends in Florida for my birthday soon after.  It was just like the Caribbean, the humidity, the sunshine.  It was like the Caribbean with amenities, with Superstore or Target.  Of course, then we fell in love with a fantastic house; retro with bright green shag carpet and that was it.  I found a little statue buried in the back yard.  He was carefully dug up and I drilled a hole in his ass and shoved a hose up there.  He stands by the pool and pisses in it!  We call him Austin Powers.”   It really doesn’t get more rock and roll, does it? 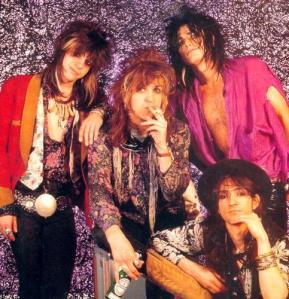 As everything falls into place there is the return of The Dogs D’Amour, not known to be too friendly at the time of their break up, can Bam explain the change of heart?

“It really all came about to help a sick friend by doing a benefit show.  Paul Hornby, who filled in as the drummer for the Dogs on a recording trip to Finland, at the time of my first child’s birth, had been diagnosed with bowel cancer.  We all got together through the internet and one benefit show became eight in a row. We have had calls from promoters all over.  Germany, Sweden, Italy and the like, begging for more shows, but we want to keep it simple to start.  Who knows what will happen after this! ” 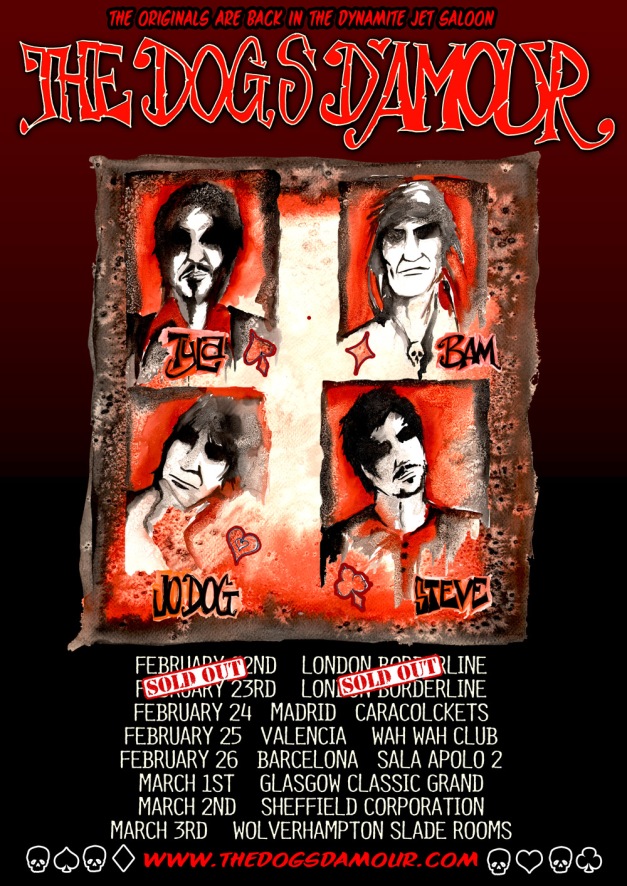 So, with two sold out shows at The Borderline in London, England, to kick off the tour on February 22 and 23 2013, followed by a post UK trip to Spain for three shows and then three more back in UK, the Dogs are far from The Trail of Tears and they are Gonna Get It Right this time.

The Dogs D’Amour are currently rehearsing in Florida! 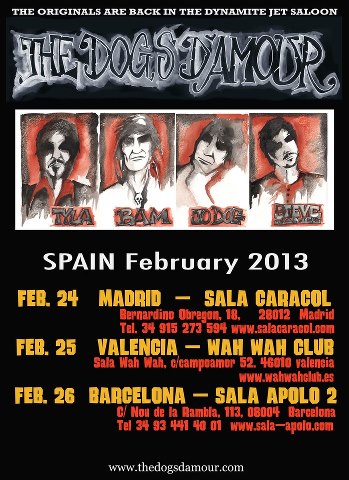