No Cities to Love. Not a song about Los Angeles.

Fred Armisen has long been a darling of the US comedy scene. So much so, that after his own personal success in shows like Saturday Night Live and Portlandia, his punk character Ian Rubbish has grown legs and gone very live.

Rubbish was the opening act for both nights of Sleater-Kinney shows at the Hollwood Palladium, April 30 and May 1 of 2015, and he absolutely wasn’t rubbish. 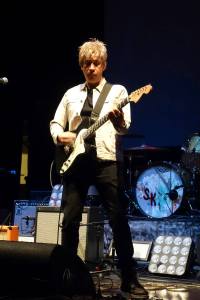 He was engaging, convincing and musically very good.

Alas, the younger members of the crowd probably have no clue the absolute fucking chaos that Maggie Thatcher caused in the United Kingdom during her reign as Prime Minister, and had they, the Rubbish set would have been supported in an entirely different way.  They are however, seriously aware of recent events happening because of seemingly lawless and racist members of certain police forces in North America, and they are totally in agreement with the song Hey, Policeman!

Rubbish is both a superb homage and a very fucking funny play on the UK punk scene.  He could spit more.

It has to be noted that Fred Armisen is absolutely Sleater-Kinneys biggest fan.

Body/Head are probably the Van Gogh of music. Much of the crowd are certainly missing, at the very least an eardrum, and likely at this point a clue. 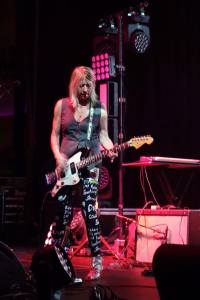 For some yes, but art in this form appeared to lull the majority of the attending crowd into a real sense of “what the fuck?”  Those in attendence said it all, without even so much as muttering a word.

It cannot be disputed that Gordon had immense success with her band Sonic Youth, and that will likely not be recreated ever.  Hell, she is 62 years old and still has more punk in her pinkie than Sum 41 had in their entire band.  But one should question whether too much time on your hands is a good thing?  Of course many others will also vocalise that to see Gordon live in any capacity is a gift and watch her.  Even if she decides to just pick her nose.

This half hour long ritualistic frenzy was certainly for those with a very aquired taste, and from the looks of the faces in the crowd, there was not a large gathering of such types among them.

In late October 2014, this was posted on Twitter.  It made waves quickly.

Woke up to the news that my band #sleaterkinney is getting back together and that we have a new record coming out in 2015.

In the eight years that Sleater-Kinney were apart, they did not let their musical talents slide.  There were other projects from all band members, and many hours have quite obviously been spent on sharpening the ability to be a better musician.

After a slow start to their set, the crowd finally came back to partial life three songs in, but it was sheer hard work and determination on the part of the band, perhaps after the rare choice of opening band.

A fairly sparse and less than intense crowd on night one of a two night run at Hollwood Palladium, was not helped during One Beat, as a large drunk male bully on Corin Tuckers side of the stage disrupted everything.  Tucker vocaized that she was unsettled, and the damage was done.

The oomph was ripped from them, and though Tuckers vocal is not only unique, it is also fantastic, but it showed a little stress after this occurence. 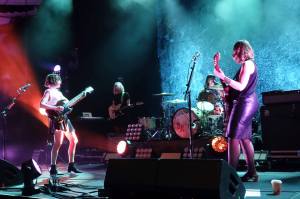 At this point in a tour, these ladies have been on the road essentially since February, and a tired vocal can happen.   Brownstein sounded hoarse at some points, but never stopped giving her all.  When you work eight jobs at the same time it’s likely expected.  Brownstein is also a very highly regarded actor.

The energy from the crowd was not as forthcoming as it should have been at any point tonight and it surely sucked a little bit of the life from each member of the band.

Janet Weiss still drummed up a fucking musical storm and proved herself to be one of the best live percussionists on the face of the earth.  Kudos and then some more.  Richard O’Brien was right.

All things considered at this show, which was added after the May 1 show sold out, this band are proof that live performance of their wares only seems to produce better sound than anything you hear on a recording, which is already stunning, and that any energy being thrown around by Carrie Brownstein, and a vocal to launch battleships provided by Tucker, is the only spark anyone needed to carry this band through on the opening night.

Forward to night two.  An entirely different kettle of fish…

Sub Pop record label mates TheeSatisfaction pulled off a stunning set, and sent out a message of equality and tolerence through their music,  in a way that was both unique and refreshing.  R & B/Hip Hop for the win of the opening bands.

The melodic and pitch perfect vocals performed to a backing track, with a light dance element was all that was needed.

What gets the attention of a room full of Sleater-Kinney fans better than Carrie Brownstein high kicking in a super short skirt wearing no panty hose, you may ask?

Nothing, is the answer.

When she starts unbuttoning her shirt and rolling around on the floor flashing her knickers, this crowd goes absolutely fucking crazy.

Weiss is such an underrated entity.  To watch her during an hour and a half set, you will sweat your own tits off.  She is that intense.  She is that good.

Tucker thanked Planned Parenthood for being in attendence.  They had accompanied the band on the tour and were promoting womens health.  This type of action is what seperates this band from everyone else.  Their convictions are an important element of what they do.  The fans hold them in high regard for it.

During Youth Decay a couple members of the White Hat Squad, a group of fans who met through Tumblr and had travelled, some from as far as Auckland and Canada, and who were cojoined on the front row for both performances, became suitably confused when trying to count to eight on the one hand that was continually punching the air, and keeping time.

As Entertain bellowed out, Brownstein twice lobbed the mic stand across the stage.  The energy from the crowd made it work tonight.  Of course Brownstein was inciting them, at times, one foot on the monitor, giving the crowd a good old fashioned flash! Her voice again faltering during a few songs, but still not worse than fucking killing it… at any point.

There were so many “moments” during this show, fans had waited eight years to see this and it would take a week to document them.

So, in summation; at the start of the tour, in February 2015 they were good.  Luke warm if you will, just getting started.  Tonight was raw Sleater-Kinney.  The real mother fucking deal.  The majority of the audience were there because they absoutely love the band, not because it was Thursday in Los Angeles and there was nothing else to see here, as seemed to be the case the previous night.

It seems a shame that there are only a few dates left to go when the performance is top notch and the sets are exactly what the fans want.

A sign perhaps that another tour next year should be the way to go?

All photography by Helen Fletcher.  Many thanks.